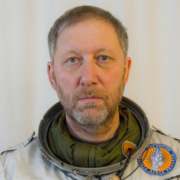 « Under the project title “My Private Space Program” I am concerned with digital space and its influence on my art. I understand it as boundless and unfathomable as the universe itself. My central symbol for this is the computer-created 3D character of a cosmonaut/astronaut.
In 2007 I launch a first copy as an open source artwork by mouse click into the digital unknown. Like a chaotic cell division the “flight” leads from this time on incessantly through the net space. There is no longer any control over the results and how surprising or subversive this experiment will manifest itself in the end. » 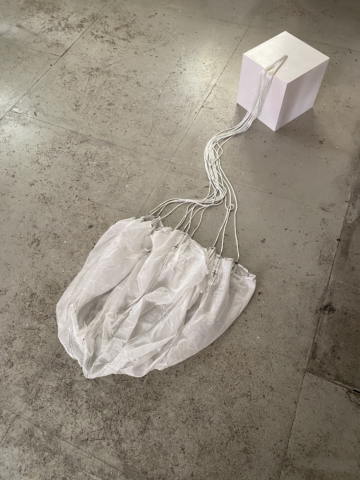 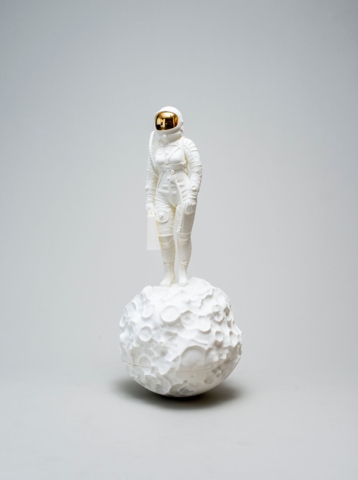 Under the art title “My Private Space Program” the artist Max Grüter deals with digital space. He understands it as boundless and unfathomable as space itself, which surrounds everything on earth. His 3D modeled astronauts – cosmonauts represent the central symbol for this. These data sculptures are a characteristic leitmotif for Grüter’s artistic work in virtuality.

Whereby for Grüter, in place of Neil Armstrong’s legendary “small step” into the lunar dust, a “single mouse click” can embody this departure into a new universe.
With the project title “Infiltrative Sculptures”, the artist will let his very first “3d data spaceman” float away from his care as an open source sculpture, out into the digital unknown, starting around 2007. As if by means of cell division, the work is to anchor multiplied on hard disks like a cuckoo’s egg brought to an unpredictable completion by others. This rigorous delivery of his data work is understood by Grüter as a personal, emotional borderline experience. What artist is willing to irretrievably let go of their work in the highest quality and, on top of that, to undermine the noble art concept of uniqueness?

Because it is of high quality and free of charge, downloaded tens of thousands of times and replicated by means of 3D printing, over time this “mouse click” generates a global Gesamtkunstwerk in the digital memory of the Internet community. It is literally written in the stars where the art adventure infiltrating all social strata will go and what surprises can be expected at any time.

This is what happens in 2019, on the fiftieth anniversary of the moon landing.
At that time, a world-famous Swiss watch brand apparently seized one of these “spacemen” the artist has been floating on the net since 2012.
This is a stylized version of an upright 3D Apollo astronaut. But it did not remain with the download and approved private use. Luxuriously titled “Golden Moments”, in mirror-polished gold look and all conceivable dimensions, the work has since manifested itself around the globe.
(Very often in illustrious company of celebrities from Hollywood and space travel etc.).

But obviously it was completely overlooked to inform the artist about this project. Whereupon this felt induced to undertake legal steps. These finally led to an amicable and confidential agreement between the watch brand and Max Grüter.

Thus “Infiltrative Sculptures” artistically clarifies – there is generally no control over results. A single mouse click can change everything – or not – and art can be everywhere – or not.

1955 Grew up in Horgen on Lake Zurich, lives and works in Zurich. At the end of the nineties, Max Grüter radically embraces the computer as his basic artistic instrument. As an electronic sculptor, painter, draftsman and self-proclaimed “first virtual astronaut”, Grüter commutes between the terms of the digital and the real world. He understands his works as self-attempts to fathom digital coolness and distance by means of emotional experience and tangible physicality. Free-dimensionally, Grüter makes free use of all means of expression offered to him in our space-time structure. When viewing his thusly resulting images, sculptures and video animations, their digital origins usually fade in to the background to make way for a humorous human closeness.